When you look at a map of the seas and oceans, you might imagine they just merge into one another. It appears that there is only one large ocean, with various regions given different names. You’ll be astounded by how distinct the borders between them are! The Pacific-Atlantic Ocean border is a dividing line between two worlds and one of the world’s most fascinating locations. It looks as if the two oceans meet at an invisible wall that does not let them flow into each other and mix their waters. Well, in this post, we will tell you why the Pacific and Atlantic oceans don’t mix.

Why do these two oceans not mix? What gives that it happens? We know there is no hidden barrier inside, because water is water. What may possibly obstruct its mixing? Water, on the other hand, might be very different. The Atlantic and Pacific oceans have differing densities, chemical compositions, salinity levels, and other characteristics. Their hue contrasts clearly, indicating that they are not identical.

If you recall a few elementary physics concepts, you might argue that a denser liquid should eventually end up lower and a less dense liquid higher. If this were true, the boundary between the two oceans would appear to be a horizontal line rather than a vertical one, and the difference in salinity between them would become less noticeable as they came closer. So why doesn’t it happen in this region?

To begin with, the difference in water density between the two oceans is not significant enough for one to sink while the other rises. Even so, it’s enough to keep them apart. Inertia is still another factor. When things move in a system of axes that is moving, one of the inertial forces known as the Coriolis force influences them.

In simple terms, the Earth is moving, and all moving things on it will be affected by Coriolis force, causing them to deviate from their intended path. As a result, objects on the Earth’s surface vary in clockwise and counterclockwise directions in the Northern and Southern hemispheres, respectively. However, the Earth moves slowly; it takes a day for the planet to complete a full cycle around its axis. That’s why the Coriolis effect is only seen over lengthy periods of time, such as with cyclones or ocean currents. As a result, the flow directions in the Atlantic and Pacific seas diverge. It also prevents them from mixing.

The difference in the strength of molecules

The strength of molecules, connections, or surface tensile strength, is another significant difference between the two oceans’ water. Molecules of matter are held together by this strength. The two oceans have completely different surface tensile strengths, which prevents them from mixing. They might start mixing over time, but because their flows are in different directions, they just don’t have the time. We think that it’s just water in both oceans, but its separate molecules meet for just a short moment and then get carried away with the ocean flow.

What are ocean clines?

Ocean clines are the boundaries between two bodies of water having distinct physical and biological properties.

Haloclines are the borders that separate waters with various salinities, and this is what we observe when the Atlantic and Pacific oceans meet. When Jacques Cousteau was deep diving in the Strait of Gibraltar, he discovered this. You can create a halocline at home if you pour some seawater or colored salty water into a glass and then add some fresh water on top of it. The only difference is that your halocline will be horizontal, and ocean haloclines are vertical.

Don’t you think, though, that only the Atlantic and Pacific oceans don’t get on well with each other! There are a lot of places on the planet where water in the two seas or rivers does not mix. There are also thermoclines – borders between differing temperatures of water, such as the Gulf Stream’s warm water and the much colder North Atlantic Ocean.

Chemoclines are the most amazing ones. These are borders between waters having different microclimate and chemical make-up. The Sargasso Sea is the biggest and most widely known chemocline. It is a sea within the Atlantic Ocean which has no shores but you’ve got no chance not to notice it.

Other clines of the earth

Let’s have a look at the other most spectacular clines on the planet.

1. The North and Baltic Seas

These two seas meet near the Danish city of Skagen. The water in them does not mix because of different densities. Sometimes you can see the waves of the 2 seas clash into each other, making foam. And yet their water mixes gradually, that’s why the Baltic Sea is slightly saline. If there had been no water coming to it from the North Sea, it would’ve been a huge freshwater lake.

2. The Mediterranean Sea and the Atlantic Ocean

Their water does not mix because they meet at the Strait of Gibraltar and have differing densities and salinities. 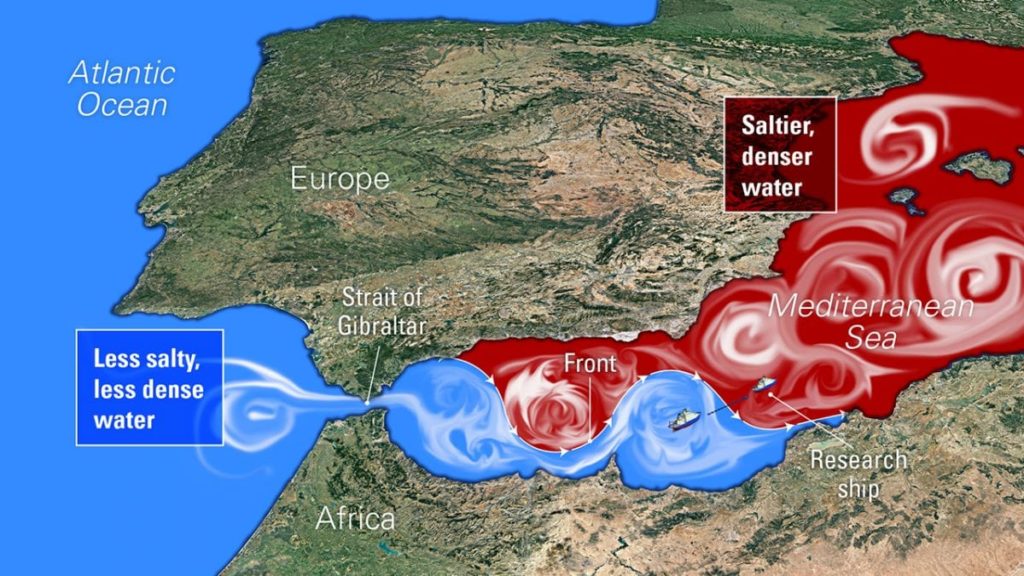 3. The Caribbean Sea and the Atlantic Ocean

The place where they meet is near the Antilles and looks like someone has painted the water with different shades of blue. Another place where these two meet is the Eleuthera Island of Bahamas. The Caribbean seawater is turquoise and the Atlantic Ocean water is dark blue.

4. The Surinam River and the Atlantic Ocean

They meet near Paramaribo in South America.

5. The Uruguay River and its afflux

These two meet in Argentina’s Misiones province. During rainy seasons, one is cleaned for agricultural use, while the other becomes almost red due to loam.

6. The Rio Negro and Solimões Rivers (part of the Amazon River)

6 miles from Manaus in Brazil, Rio Negro and Solimoes rivers flow into each other but don’t mix for about 2.5 miles. The Rio Negro is dark and Solimoes – light, they have a different temperature and speed of flow.

They meet in Koblenz, Germany. Rheine has lighter water and Mosel – is darker.

The junction of these 3 rivers is in Passau, Germany. Ilz is a small mountain river to the left, the Danube is in the middle, and Inn is the light river to the right. Inn is wider than the Danube here but still is its afflux.

They meet in India. Alaknanda is dark and Bhagirathi is light.

They flow into each other in Kazakhstan near the city Ust’-Kamenogorsk. The Irtysh has clean water and Ulba – cloudy.

11. The Jialing and Yangtze Rivers

They meet in Chongqing, China. The Jialing is clean and the Yangtze is brown.

These two rivers flow into each other in Omsk, Russia. The Irtysh is cloudy and the Om – pure and transparent.

They meet in the Altai Republic, Russia. 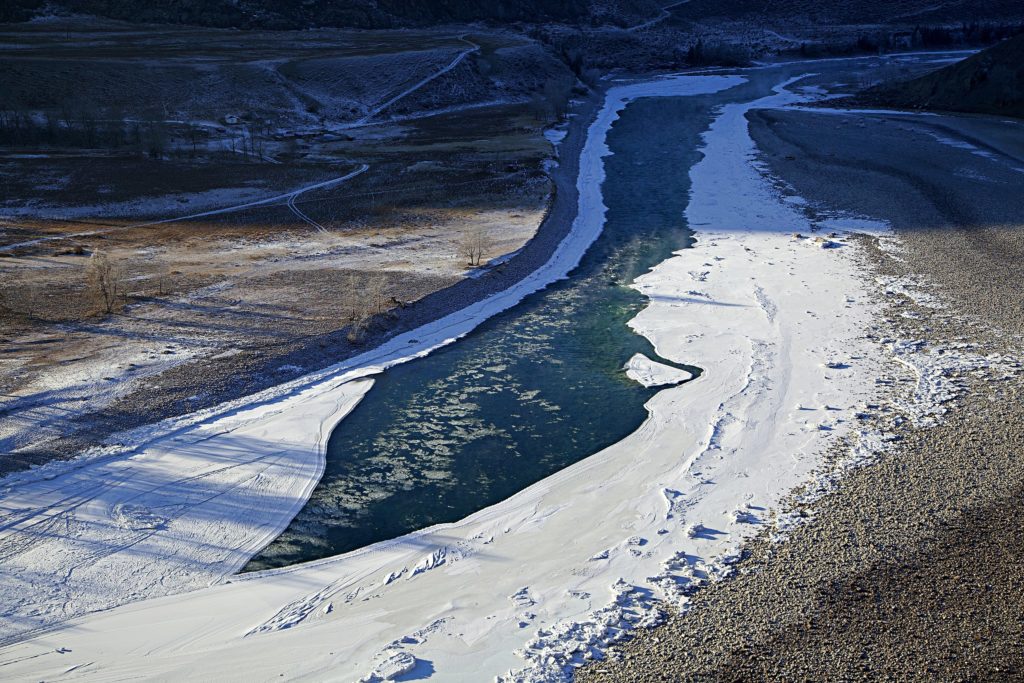 14. The Green and Colorado rivers

The place of their junction is Canyonlands National Park in Utah, USA. Colorado is brown and Green is green.

15. The Rhone and Arve rivers

In Geneva, Switzerland, they merge into one another. The Rhone is a clear river that runs from Lake Geneva, whereas the Arve is foggy because it receives its water from the Chamonix valley glaciers.

So, this was all about why the Pacific and Atlantic oceans don’t mix. Well, you can now information about other waters that do not mix. I hope you enjoyed this article. For more articles, visit our website.

Note: Must read A Terrific Star Explosion Will Be Seen in The Skies of 2022′: Is It Really True?

One thought on “Why Pacific and Atlantic oceans don’t mix?”