US President Joe Biden announced the first batch of images at a White House conference on Monday night. The first image features the ancient galaxy cluster SMACS 0723, while the other four show the other four cosmic objectives.

The final four were released on Tuesday and feature breathtaking images of nebulae, which are enormous clouds of gas and dust, exoplanets, or planets outside our solar system, and a region in space where many galaxies interact with one another.

NASA administrator Bill Nelson stated that the stunning photographs will assist researchers in addressing issues that they have yet to address.

“It’s clear that Webb represents the best of Nasa,” he said during a watch event at the Goddard Space Centre in Greenbelt, Maryland. “We don’t want to ever stop exploring the heavens or stop fearing to take another step forward for humanity.”

The $10 billion James Webb Space Telescope, which was launched in December, will gaze back at the galaxies that were created just after the Big Bang, or about 13.8 billion years ago. It will also observe extraterrestrial planets and look for signs of life by analyzing the chemistry of their atmospheres.

“This is a celebration for all humanity,” Nasa astronomer Michelle Thaller said.

With enough fuel for 20 years, the space observatory is now fully operational for science. The National examines the four most recent photographs that NASA, the European Space Agency, and the Canadian Space Agency have all just provided.

The 2013-discovered exoplanet WASP-96 b’s spectra were recorded by the telescope. It has half the mass of Jupiter, our solar system’s largest planet, and is primarily formed of gas. It is 1,150 light-years away from Earth and revolves around its star WASP-96 once every 3.4 days. The observations were made using the Slitless Spectrograph and near-infrared imager equipment aboard Webb. These have helped in exposing the hot gas giant’s atmospheric properties. Key gases in the planet’s atmosphere may now be found and measured by scientists, who can also determine the temperature and presence of haze and clouds.

Discoveries regarding the Southern Ring Nebula

The telescope’s two onboard cameras photographed this planetary nebula, an enlarging cloud of gas encircling a dead star. It was known that the fainter star at the center of this image, which is located 2,000 light-years from Earth, has been ejecting rings of gas and dust into all directions for thousands of years. Now that this star is covered in dust, the telescope has made this discovery for the first time.

The region is also referred to as the NGC 3132 and “Eight Burst” Nebula; the term is derived from the fact that many of them seem circular when viewed through a telescope. It is enormous, with a diameter that is almost half a light-year.

These kinds of observations will assist astronomers in learning more about these and other planetary nebulae, including the compounds that are present and where they are located inside the gas and dust shells.

Stephan’s Quintet, or NGC 7318B, is a compact galaxy group with five galaxies that was found in 1877 and is situated 290 million light-years away. They’re all four engaged in a cosmic dance of recurrent close calls. This galaxy group’s massive mosaic, which has been constructed by researchers, is now Webb’s largest image to date. It was built from about 1,000 different image files and includes more than 150 million pixels. The observations offer fresh perspectives on how galaxy evolution in the early universe may have been influenced by galactic interactions. 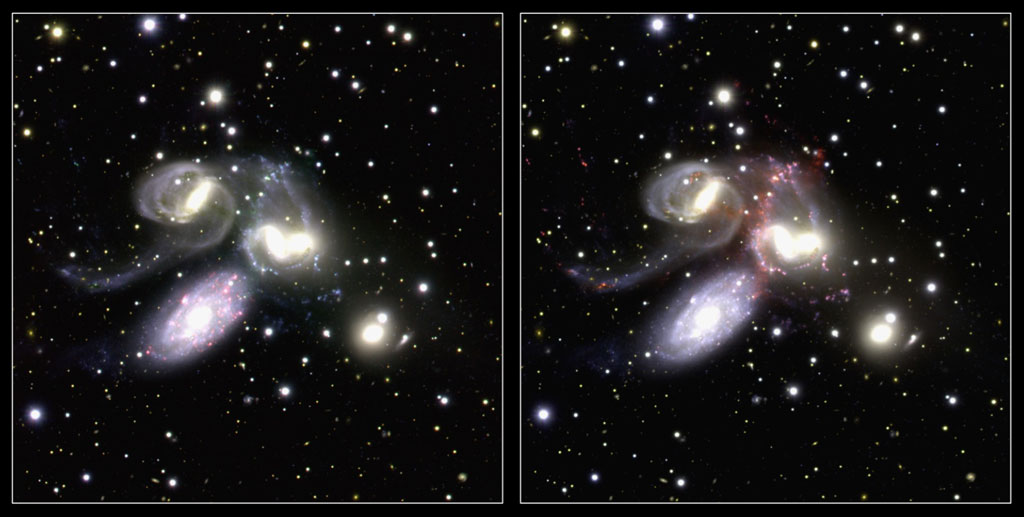 “Sparkling clusters of millions of young stars and starburst regions of fresh star birth grace the image,” Nasa said. “Sweeping tails of gas, dust, and stars are being pulled from several of the galaxies due to gravitational interactions. Most dramatically, Webb captures huge shock waves as one of the galaxies, NGC 7318B, smashes through the cluster.”

This nebula, one of the largest and brightest in the sky, is one of the sites of “colorful fireworks” as stars are born and die there, 7,600 light-years away in the southern constellation Carina. There are numerous big stars there, with masses ranging from 50 to 100 times that of the Sun. This nebula had previously been seen by telescopes, but the James Webb Space Telescope has observed it in greater detail. The first generation of newborn stars in this nebula condensed and burned in the middle of a cloud of cold molecular hydrogen three million years ago, setting off the local pyrotechnics. 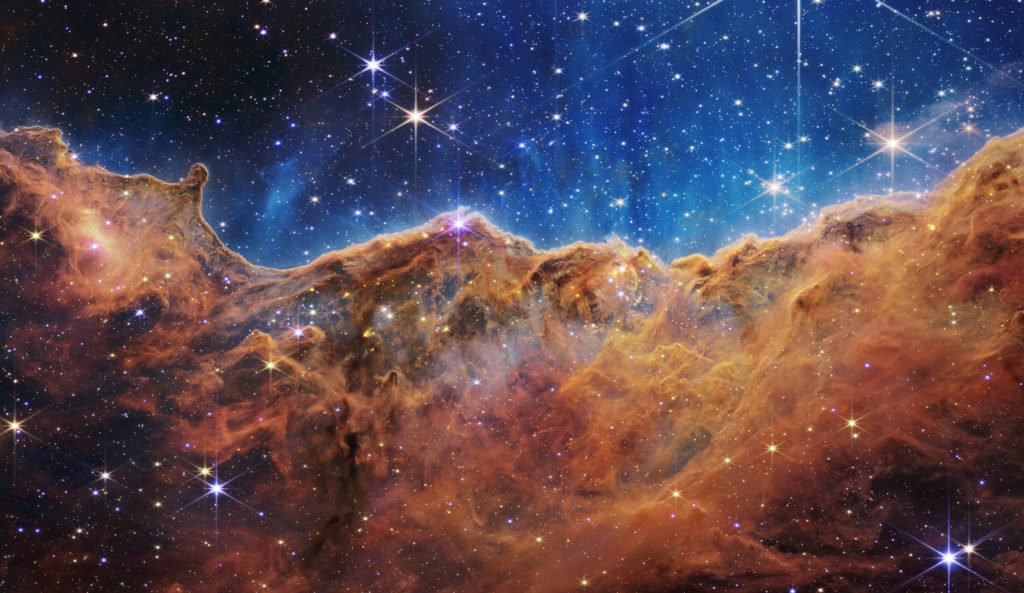 According to Amber Straugh, deputy project scientist for Webb “What’s happening and sort of the overall landscape is we have these gigantic hot young stars up here to the top of this rim. And the radiation — it’s stellar winds from those stars — are sort of pushing down, running into all of this”.

The telescope’s view of the Carina Nebula has made previously invisible regions where stars are forming stars visible.

“I’m just blown away by the level of detail we can see like in the outer part of this nebula, it’s incredible,” Ms. Straugh said.

Astronomers still don’t even know all of the galaxies and objects in the image’s backdrop. Let’s see when will the astronomers find out the answers of the unknown questions.