This is the map of Africa. If you look to the South, you will see lush vegetation, with lots of greenery. However, when you go north, things are different. Covering multiple countries, Sahara is the most gigantic desert globally, with miles and miles of dune formation. Altogether, the Sahara Desert covers 9 million square kilometers, meaning it will swallow Spain 18 times! However, did you know that this vast stretch of sterile sand covering a third of the African continent was covered in lush vegetation thousands of years ago? What happened to the Sahara? And what is happening to it right now? In this post, we look at the terrifying discoveries scientists made under the Sahara Desert! Let’s go and dig out the facts about the Sahara Desert.

The Atlantic Ocean is bordered on the west by the Sahara, on the east by the Red Sea, on the north by the Mediterranean Sea, and on the south by the Sahel Savannah. Algeria, Chad, Morocco, Niger, Western Sahara, Egypt, Libya, Mali, Mauritania, Sudan, and Tunisia are among the 11 countries that make up the vast desert.

The sand dune fields of the Sahara Desert are commonly shown in films. The sand dunes can reach about 600 feet (183 meters) in height. However, they only cover around 15% of the desert’s total area.

The Sahara Desert was a tropical area

The Sahara used to be a tropical area, so how did it become the harsh arid region it is today? The answer to this question takes us several thousands of years back. Periodic episodes of dampness and aridity have long plagued the Sahara. Small wobbles in the tilt of the Earth’s orbital axis cause these oscillations, which modify the angle at which solar radiation reaches the atmosphere. During the West African monsoon season, more energy from the sun has poured in at regular periods throughout Earth’s history. During these periods, which are known as African Humid Periods, substantially more rain falls over North Africa. Additional rain brings more flora, rivers, and lakes to the region. 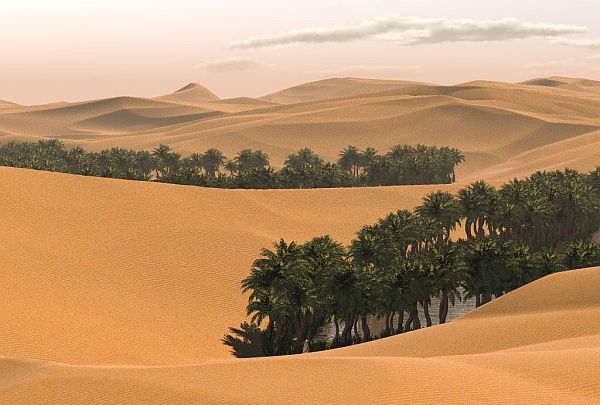 However, something weird happened between 8,000 and 4,500 years ago. The change from humid to dry occurred far faster in some areas than could be described just by orbital precession, culminating in the modern-day Sahara Desert.

Archaeologist David Wright explains what happened next in his investigation. As he read over the archaeological and environmental data, primarily from sediment cores and pollen records, he noticed what appeared to be a pattern.

There was a comparable alteration in the sorts and variety of plants wherever the archaeological record demonstrated the presence of pastoralists, that is, people with their tamed animals. Every time humans and their goats and cattle hopped across the grasslands, it was as if they had left a trail of brush and desert in their wake! This led Wright to the conclusion that overgrazing the grasses reduced atmospheric moisture—you know, plants emit moisture, which causes clouds—and increased albedo. He believes this may have accelerated the end of the humid period beyond what orbital shifts might explain. These nomadic humans may have also utilized fire as a land management tool, which would have accelerated the desert’s spread.

Whales in the Sahara Desert

Do you picture whales frolicking on the rolling sand dunes when you think of the Sahara Desert? While this is exceedingly doubtful due to whales’ inability to thrive outside of water. There is evidence that the present whale’s relatives formerly swam around in the scorching African desert! In the year 1902, a group of geologists led their camels into a valley in Egypt’s Western Desert. Strong winds had molded sandstone rocks into unusual shapes over centuries, and the moonlight shone brightly at night, making the sand glitter like gold.

Because of the scorching summer heat, a nearby hill was dubbed “Mountain of Hell,” however whale bones were discovered in this dry valley! The skeletons ranged in length from 50 feet to 50 feet, with vertebrae as thick as campfire logs. They dated back 37 million years to a time when this area and all of northern Egypt were covered by a shallow, tropical sea! The archaic creatures under the sand would eventually provide answers to one of evolution’s most vexing questions: how whales became whales, even if the geologists didn’t recognize it at the time. 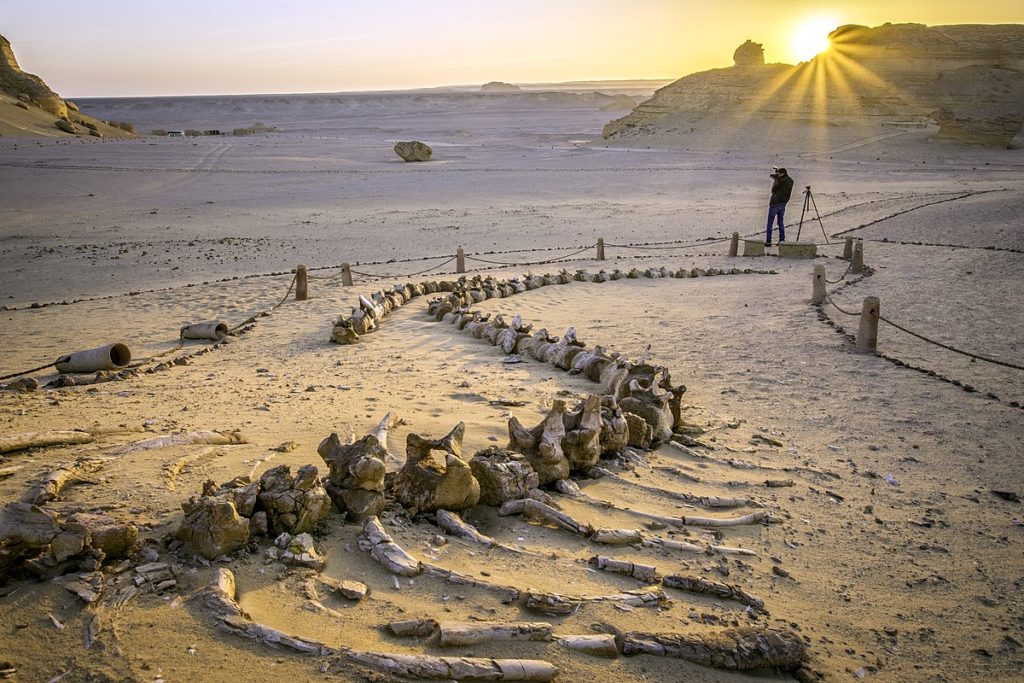 The existence of feet was one indication discovered in these long-dead whales! Whales had long been thought to be terrestrial creatures that had progressively lost their four legs as they moved into the ocean over millions of years. Modern whales have vestigial hind limb bones as proof of this. But it wasn’t until paleontologists discovered legs and knees in hundreds of whale fossils unearthed in Wadi Hitan that the shift was clearly seen. Although older footed whale fossils have been discovered, Wadi Hitan are unrivaled in terms of numbers and degree of preservation. The valley, which is roughly a three-hour drive from Cairo, is now a UNESCO World Heritage site that attracts 14,000 visitors every year!

Paleontologists believe that whales’ landlubber ancestors were scavengers living near the sea, similar to deer or pigs. They began spending more time in the water some 55 million years ago, first eating dead fish by the shore, then hunting prey in the shallows, and finally wading deeper. As a result, some of them developed characteristics that made hunting in water easier. They grew bigger over time as they no longer had to hold their full body weight at sea, their backbones lengthening and rib cages expanding.

There are two types of fossils found in the valley. Basilosaurus was a massive dinosaur with an eel-like body. The Dorudon, which was smaller but more powerfully muscled, resembled a modern whale until its mouth opened, revealing a jaw laced with serrated daggers instead of peg-like teeth. Intriguingly, the fossils of more than 75 whales have been discovered in Chile’s Atacama Desert. Scientists have been debating how they landed up there.

Have you heard about the lost city of Atlantis?

You’ll be surprised to learn how this famous city is linked to the upcoming Sahara Desert discovery! This brings us to the Sahara’s Eye, also known as the Richat Structure or Guelb er Richat! It’s a massive bull’s eye-shaped geological structure in the Sahara Desert. The structure spreads across a 40-kilometer-wide swath of Mauritania’s desert. Only a few nearby nomadic tribes were aware of the formation for centuries. It was initially shot by Gemini astronauts in the 1960s, who used it as a reference point to track the progress of their landing routines. Later, the Landsat satellite captured additional photographs and supplied data on the size, height, and extent of the formation. The Eye of the Sahara was first thought to be an impact crater formed when a spacecraft collided with the surface. 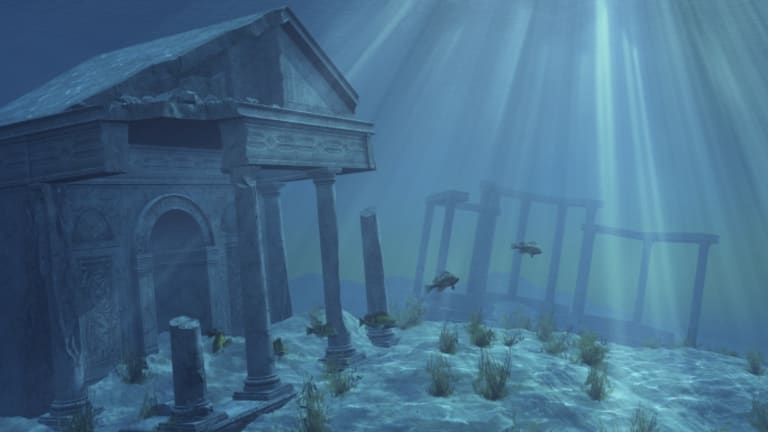 Extensive analyses of the rocks inside the structure, on the other hand, demonstrate that it is wholly Earth-based, forcing geologists to explore for alternative explanations. The Eye of the Sahara, according to geologists, is a geologic dome. The formation comprises rocks that are at least 100 million years old, with some dating back to the dawn of life on Earth. Igneous volcanic deposits and sedimentary layers formed by the wind pushing dust and water deposits, sand, and mud are examples of these rocks. In the eye area today, geologists can find kimberlite, carbonatites, black, and rhyolites, among other forms of igneous rock.

However, there is another explanation for this Eye of the Sahara!

The remains of the ringed city mentioned by Plato in the fourth century BC can be found in Mauritania, an African country, indicating that it has been lurking in plain sight all this time! Since Greek philosopher Plato first described a mysterious island that seemed to vanish in 350BC, the search for Atlantis has continued.

The Sahara Desert continues to be a source of mystery, and the latest is about a device discovered there whose functions are still unknown!

It’s the Clayton ring, and it’s even more perplexing since these rings were discovered in Egypt’s most hostile section of the Sahara Desert! Clayton, P.A. (1896–1962), was a geographer and desert explorer. Clayton rings are clay cylinders that are conical in shape and open on both ends. They always have one or more perforated clay discs that are slightly larger than the ring’s smaller aperture but do not fit as covers. Some were constructed as a set by potters, while others, were reworked from antique ceramic jars and sherds. The Egyptians who lived beside the Nile did not use these artifacts. Instead, during Egypt’s first dynasties, known as the Sheikh Muftah civilization, they were a significant element of the equipment of nomadic herders living in the Dakhla Oasis.

Clayton rings and discs have been discovered in the oasis, amid seasonal hunting and herding camps of this culture, but also in caches up to 300 kilometers away from permanent water sources and well beyond any herdsman or hunter’s safe roaming range.

What made these objects so crucial that people went to the trouble to take Clayton rings far into the desert? This is a question that is yet to be answered!

Note: Also read What is inside a black hole? Black hole mysteries