In this post, I will share with you my personal experiences and I will tell you facts about recycling.

My roommates and I built a compost bin for food leftovers outside our apartment about a year and a half ago. We were attempting to divert as much rubbish from the landfill as possible. And we thought we were well on our way to eco-conscious bliss when we snuggled that black compost roller in the corner of our yard. Our system was straightforward. All of our food waste was composted, all of our plastics and glass was recycled, and everything else was thrown away.

It was great, except for one big problem. We quickly discovered that the building’s recycling dumpster also happened to be our trash bin. Our landlord, and even the waste management company, claimed that we could commingle our trash and recycling in the same dumpster and everything would get sorted at a factory, which seemed very fishy. So it got me thinking about how much of recycling actually gets recycled, and really when it comes down to it, does recycling even lower a person’s environmental impact?

After doing some research online, I realized that the recycling path of a plastic bottle is actually quite extensive. It starts with your last sip of water and could wind up in a Chinese recycling plant halfway around the world. And the plastic bottle can easily go from recycling to garbage at any point along the process. Let us begin from the beginning.

Recycling collectors come around every other week in Chicago (where I reside) to collect the blue recycling bins, and they frequently remove the lid and peer inside. If anything unusual is found, such as a soccer ball or a bundle of plastic shopping bags, neither of which can be recycled in Chicago, the entire bin is sent to the dump.

That means just one big contaminant can divert a whole lot of recyclables, including our brave plastic bottle, to the landfill. If, however, the bottle makes it past that first hurdle, it makes its way to a sorting center, used heavily in single-stream recycling programs like Chicago’s. While single-stream programs often make it easier and more convenient to recycle at home, it means more contaminants and more work on the processing end.

“What single-stream wins in volume, it sacrifices in quality,” says Susan Collins of the Container Recycling Institute. In the Chicago area, the majority of this processing is done by a commercial corporation named Waste Management. Every month, they sift 24,000 tonnes of recycled materials. 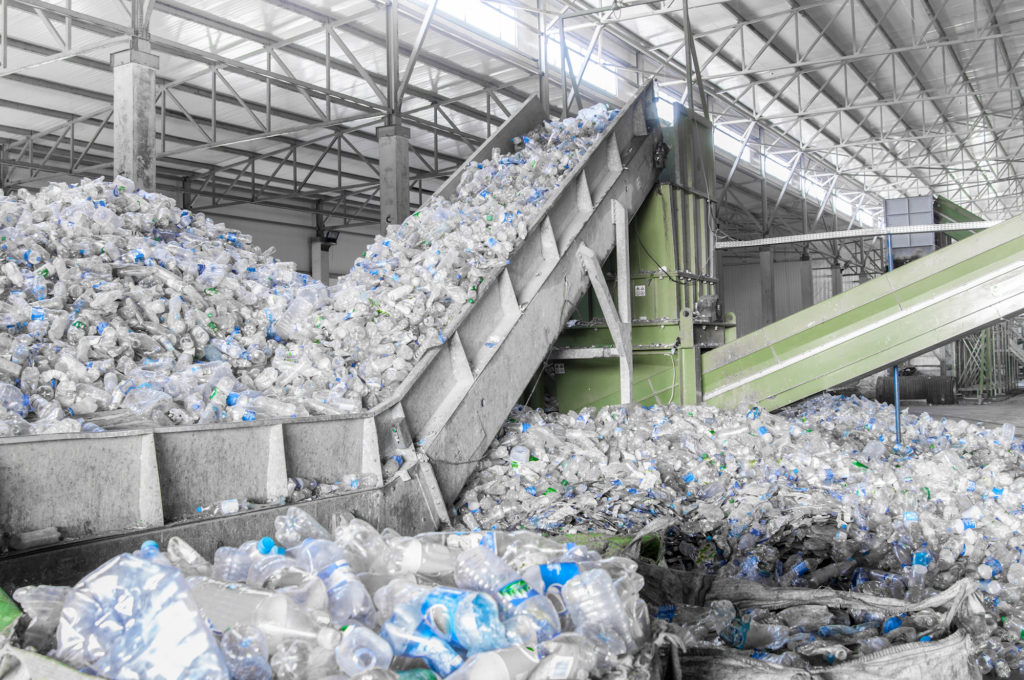 At the facility, a combination of high-tech machines and human eyes sort through every piece of recycling–pulling out what doesn’t belong, like plastics caked in food waste or even more plastic bags, all of which get sent to, you guessed it, the landfill.

According to the area director of recycling for Waste Management, 18-20%– and sometimes as high as 30%– of recycled materials are contaminated and get sent to the trash, which means that even in the processing phase, every year approximately 31,000 tons of materials put in the recycling bins around Chicago end up getting thrown out.

However, if the plastic bottle we’re following makes it through this maze of machinery, it’ll be packaged, compressed, and sold to the highest bidder. In many circumstances, the highest bidder is an overseas facility. One-third of the recycling produced in the United States is exported, with China receiving nearly half of it. However, in 2018, Chinese recycling facilities began rejecting 24 different types of American waste. As a result, the fate of our recyclables is currently unknown.

In certain circumstances, such as in Portland, Oregon, recycling facilities have turned away passionate recyclers, with some customers alleging that corporations are ordering them to dump all of their recyclables in the trash.

Understanding this very complex process is critical since recycling a plastic bottle does not eliminate its environmental impact. Recycling is still associated with fossil fuel emissions. Yes, the environmental costs of recycling are lower than the price of mining new minerals. However, this does not imply that our current waste management system is optimal.

Plastic bottles may only be recycled 7-9 times; however, the materials can survive for up to 450 years. The plastic bottle you used will eventually end up in a landfill. Finally, recycling is a helpful bandage for a problem we’ve already created, but it permits us to continue with our true unsustainable problem of overconsumption.

The bottom line: Facts about recycling

While businesses and governments must develop less environmentally harmful packaging and waste systems, it would be stupid to wait for such a systemic transformation. As a result, recycling must be combined with a more thorough examination of our consumption habits.

While Zero Waste movements may be a little too radical for some, they do an excellent job of getting to the base of the problem. Heidi Bischof’s concept of Conscious Waste may provide greater guidance for the common customer. Although she specializes in plastics, her five R’s motto may be used to a variety of situations:

First “Reflect” on our current habits, then “Refuse” what we don’t need, “Reduce” what we do need, “Reuse what we can’t refuse or reduce” and lastly “Rethink” recycling. In a sense, that recycling bin we so often turn to should be approached as a last resort.

I hope you have learned something from these facts about recycling. These recycling facts indeed are so surprising. For more global facts, visit our website.

2 thoughts on “Facts about recycling: Does recycling work anymore?”