NASA is famous for its exploration and discovery in space! However, the agency is also making discoveries under the Earth, right here on the planet! One of such is the strange new discovery under Antarctica’s ice that changes the way scientists have viewed the planet! What has NASA discovered? And does it affect you? Join us as we dive into NASA’s strange new discovery under Antarctica’s ice! Let’s go and dig the facts about Antarctica.

Few people have Antarctica as their dream destination, and that is understandable!

Almost the whole continent of Antarctica is covered in ice; in fact, fewer than 5% of the vast wilderness is ice-free!

In an area less than the 1.5 times the USA size, this region contains 90% of the world’s ice!

It’s so cold here that if you throw boiling water into the air, it’ll rapidly vaporize because most of the particles will transform to steam, while the rest will turn to little ice crystals!

Is there any vegetation in Antarctica? Almost! It consists primarily of mosses, lichens, and algae. Over the last 50 years, the amount of seasonal moss on Antarctica has progressively increased. Despite the absence of amphibians, reptiles, and terrestrial mammals, animal life is far more plentiful. Along Antarctica’s shores and icy oceans, vast populations of penguins, whales and crustaceans thrive, especially in the summer.

What about human life on this vast ice sheet? While there are no indigenous people in Antarctica, due to the harsh climate, up to 4,000 visiting scientists can be found spread out among 70 research sites in the summer, surviving the cold. During the even harder winter, that number lowers to 1,000!

Climate scientists, oceanographers, and marine biologists primarily use Antarctica as a research base. The frozen dessert, on the other hand, draws astronomers from all over the world. This is because Antarctica is one of the best places on Earth to watch space if you can stand the cold! Its dry climate and lack of light pollution contribute to this.

Speaking of watching space, this brings NASA, the king of the outer universe, into the mix! What has NASA been doing in Antarctica?

Looking down from above, the Antarctic Ice Sheet appears to be a tranquil, permanent ice blanket that has blanketed Antarctica for millions of years. But don’t be surprised if the ice sheet, at its thickest, is thousands of meters thick and hides hundreds of meltwater lakes where it meets the continent’s bedrock!

Discovery of the lakes under Antarctica

Scientists have enhanced their maps of these secret lake systems beneath the West Antarctic ice sheet and have identified two new active subglacial lakes, called Conway and Mercer! 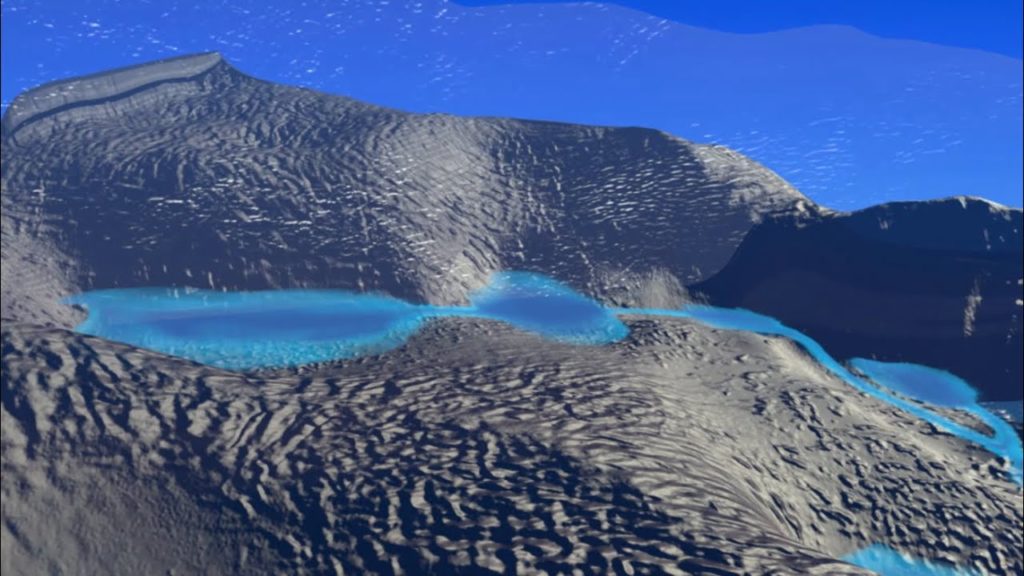 The new research is important for recognizing new subglacial lakes from space and determining how this secret plumbing system affects the rate at which ice falls into the Southern Ocean, adding freshwater that could disrupt the ocean’s circulation and organisms.

Scientists have been able to precisely map the subglacial lakes using NASA’s Ice, Cloud, and Land Elevation Satellite 2, or ICESat-2. The satellite measures the height of the ice surface, which rises and falls as lakes fill and empty beneath the ice sheet, despite its immense thickness.

The study, which was published in Geophysical Research Letters, combines height data from ICESat-2’s predecessor, the original ICESat mission, and CryoSat-2, the European Space Agency’s polar ice thickness monitoring satellite. For decades, the hydrology systems beneath the Antarctic ice sheet have remained a mystery. That began to change in 2007, when Helen Amanda Fricker, a glaciologist at the University of California San Diego’s Scripps Institution of Oceanography, made a discovery that helped to update typical subglacial lakes understanding in Antarctica. 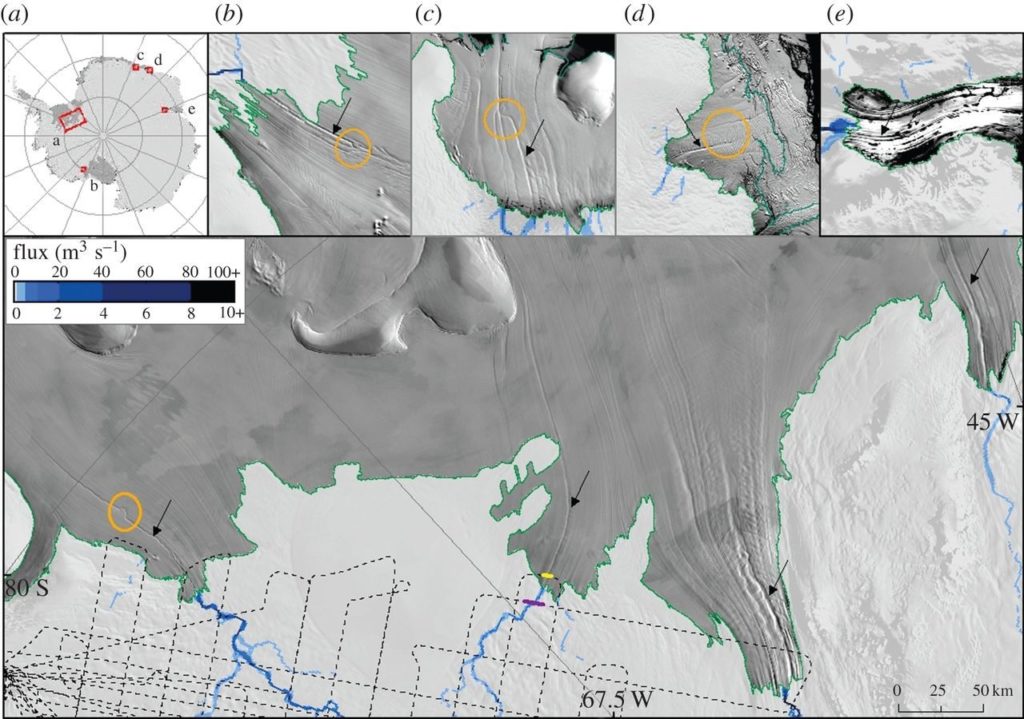 Fricker discovered for the first time, using data from the initial ICESat in 2007, that beneath Antarctica’s fast-flowing ice streams, a complete network of lakes joins, actively filling and draining over time. These lakes were formerly assumed to contain meltwater in a static state, not filling and draining.

The initial ICESat mission is credited with identifying the interconnected systems of lakes that move water around at the ice-bed interface, allowing scientists to examine all of the effects on glaciology, microbiology, and oceanography. Scientists now had a strong tool in ICESat-2, which provided data with such high precision that they were able to start mapping out the lake boundaries on the surface!

How deep below the surface are the Conway and Mercer lakes?

On the southernmost continent, these secret treasures of icy water are concealed beneath 1.2 to 2.5 miles (2 to 4 kilometers) of ice! They fill and drain in strange cycles that may have an impact on how rapidly the ice sheet moves and how and where meltwater enters the Southern Ocean. This movement, in turn, has the ability to alter Southern Ocean currents and so global ocean circulation.

Unlike many other surface lakes, which remain stationary for years, this subsurface water system is dynamic or highly fluid. Scientists were able to follow changes in the subglacial lake system between 2003 and 2020 by merging data from various satellites! The boundary between the Mercer and Whillans ice streams in West Antarctica, the lower MacAyeal Ice Stream in West Antarctica, and the upper Academy Glacier in East Antarctica were chosen because they had high satellite coverage and known active lakes.

The researchers discovered two new lakes along the Mercer and Whillans border, which they named Lower Conway Subglacial Lake and Lower Mercer Subglacial Lake. They also discovered that there were two lakes beneath the MacAyeal ice stream, rather than one.

These lakes have changed dramatically throughout time. For example, in the last 17 years, the lakes below the Mercer and Whillans ice stream boundaries have been drained at least three times. Meanwhile, the lakes below the MacAyeal ice stream have all had their own drainage and filling cycles. During the study period, the lowermost lake saw four fill-drain events, each lasting about a year. Between 2014 and 2015, the second lake emptied and began to fill again, while the third lake drained slightly between 2016 and 2017. Between 2009 and 2018, the lakes beneath Academy Glacier drained.

All of these variations are puzzle pieces in scientists’ knowledge of Antarctica’s ice sheet flow speed and direction. Researchers are already discovering connections between the under-ice lakes and the ocean:

According to Live Science, a research co-authored in January last year discovered that the draining of one lake on the Amery Ice Shelf in East Antarctica discharged as much as 198 billion gallons or 750 billion liters into the ocean in only three days!

Life in the discovered lakes

While discovering lakes buried deep beneath the ice in the Antarctic is exciting, you might be wondering if there is life in those lakes!

On the surface, the climate is harsh enough, but can life thrive deep within the two newly discovered lakes?

Early examinations of water samples taken from Lake Mercer revealed that they contained around 10,000 bacterial cells per milliliter, according to expedition leader John Priscu, a professor of arctic ecology at the University of Montana. While this is just around 1% of the 1 million microbial cells per milliliter seen in the open ocean, it is nonetheless an amazing discovery for a sunless body of water buried deep beneath an Antarctic glacier!

The high degree of bacterial life in the dark and deep underground lake, on the other hand, suggests that it could be home to higher life forms like tardigrades and other microscopic animals. Meanwhile, during an expedition headed by Priscu in 2013, substantial quantities of bacterial life were detected in Antarctica’s neighboring subglacial Lake Whillans.

The crew had also lowered a sophisticated remotely operated underwater vehicle, or ROV, as well as numerous cameras, into the dark waters of the submerged lake, which they used to take photographs and create a video of the lake floor.

The discovery has ramifications for the search for life on other worlds, particularly on Mars, where data from the European Space Agency’s orbiting Mars Express probe revealed hints of a buried lake of liquid saltwater in 2018. In fact, Priscu believes that any life found beneath the icy surface of Mars could be similar to that found in Antarctica’s subglacial lakes!

Let’s hear what you think of NASA finding evidence of life on Mars in the comment section below!