All you need to know about Omicron variant

After the Alpha, Beta, and Delta variant of Covid-19, there’s a new variant in the market. The Omicron Variant. A lot is being said about it. We know that mutations in viruses are very common. So why are people so worried about this? Why did governments across the world go into panic mode? Come, let’s understand in this post.

“If you have stopped being scared of Corona, then beware!”

“The worst type of mutation that is set to have originated in South Africa.”

“Scientists in South Africa are warning against a new Coronavirus variant of extreme concern.” 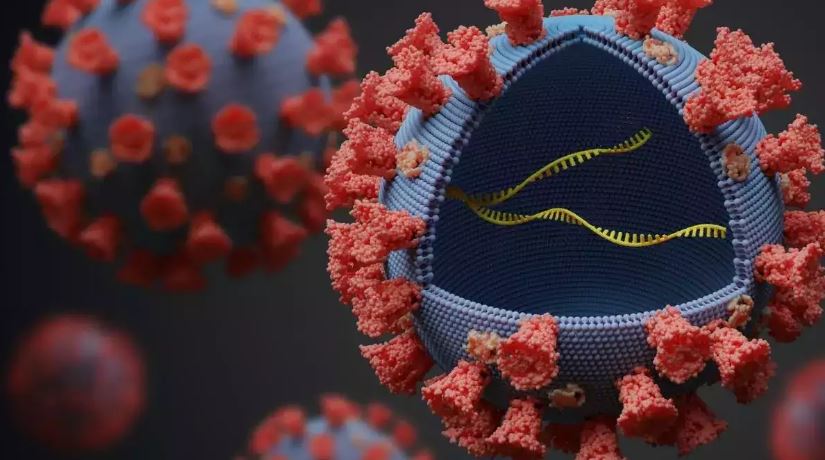 You all are listening to such kind of news now a day. The new variant has been named the Omicron variant. Or the B.1.1.529. It was first discovered in the country Botswana. It is an African country. But scientists from South Africa had reported this virus to the WHO first. On 24th November 2021. Since then, this variant has been identified in many major countries. It means that this variant has already spread to many countries, including Australia, Italy, Germany Netherlands, Britain, Israel, Belgium, Czech Republic, and Hong Kong. These are only the known cases. In reality, by the time you read this post, this variant would likely have spread to almost all major countries.

1) A Variant of Interest

The Variant of Interest is those variants due to which significant community transmission of Covid-19 can be seen. Or it may even affect the transmissibility or the severity of the virus. These variants may be potentially problematic. Currently, there are 2 variants of interest according to the WHO. First is the Lambda variant. It was discovered in Peru in December 2020. And the second is the Mu variant. Found in Colombia in January 2021.

The truly problematic variants fall into the category of Variants of Concern. Those variants of Covid-19 that increase the transmissibility are included in this type. Covid-19 spreads easier due to it or the severity of the disease increases. The symptoms become significantly stronger or the effectiveness of the vaccines or the effectiveness of the public health measures reduces. Till now, there were 4 variants of concern according to the WHO. Alpha, Beta, Gamma, and Delta. Of these, Delta was the most dangerous variant. It was discovered in India in October 2020. And the deadly second wave of Covid-19 that was seen in India, was because of this Delta variant.

The Alpha variant was discovered in the UK in September 2020. Beta in South Africa and Gamma in Brazil. Till now, Delta has been the most dominant variant. Presently, the Covid-19 cases that are seen in the world, majority of those cases, perhaps even 80% – 90% of the cases, are of the Delta variant. But the new Omicron virus has become the fifth variant to enter the VOC category.

The WHO is worried. The scientists are worried. Whether this would wreak havoc like the Delta variant. That it eventually dominates the world and because of which new waves of Covid-19 could be seen globally. Before we talk about the damage caused by this new variant, I’d like to tell you an interesting fact. A disease quite similar to Covid-19 is the Seasonal Flu. The symptoms of both are similar too.

Although the symptoms of Covid-19 are often more severe. In Flu, similar to Covid-19, the weak people and the old people are in much more danger. And did you know that according to a 2017 article of the WHO, more than 600,000 people die of Flu every year? Did you know that there are vaccines for Seasonal Flu as well? And these vaccines need to be updated every year. 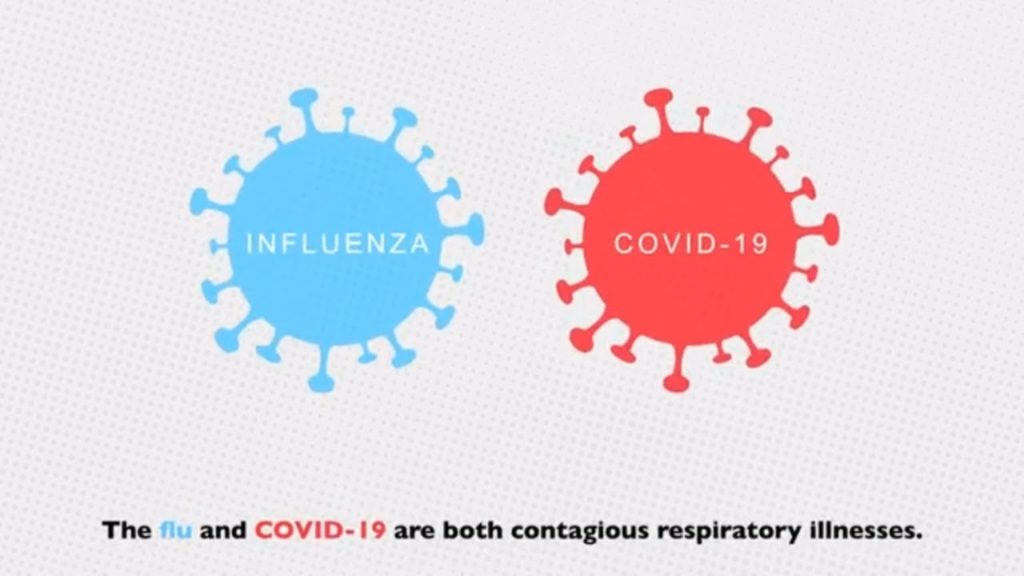 Because the virus that causes the Seasonal Flu, Influenza, a Virus, mutates it changes so much that the vaccine needs to be updated every year. You can say that we get to see mutations and variants of the Seasonal flu every year. The only difference is that it is not so highly discussed by the media.

Talking about the Omicron variant.  More than 50 mutations have been seen in this variant of the virus. The spike protein, the spikes that you see on the surface, that enable the virus to enter your body, is observed very closely because the virus spreads with the help of this. 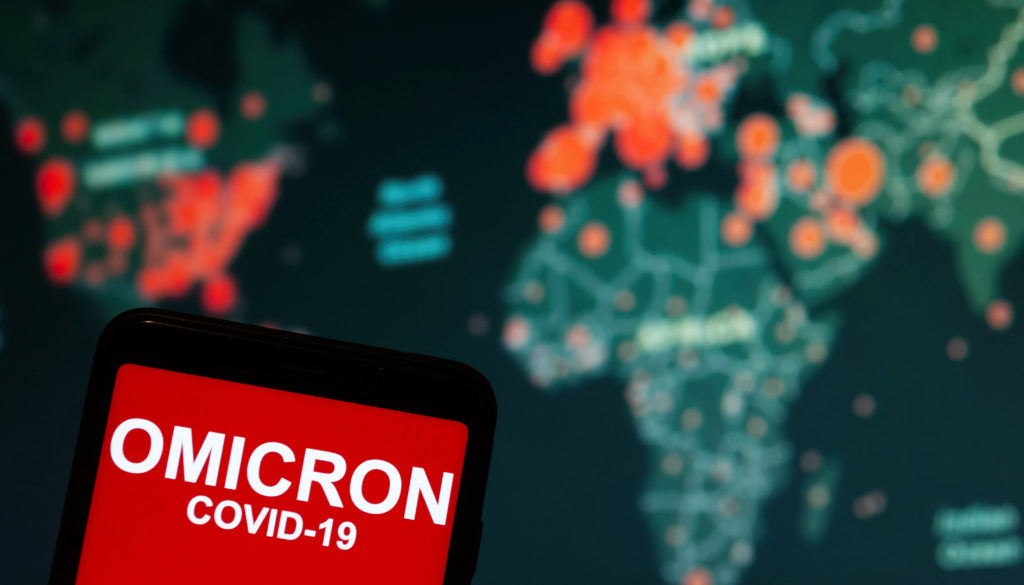 Here, the important question for us is how easily can this variant spread? How transmissible is it? Regarding this, the WHO states that we do not have sufficient data for this. Since it has been discovered very recently. But a case study was conducted in a region in South Africa. There, the test positivity saw a significant increase within a week from 1% to 30%. 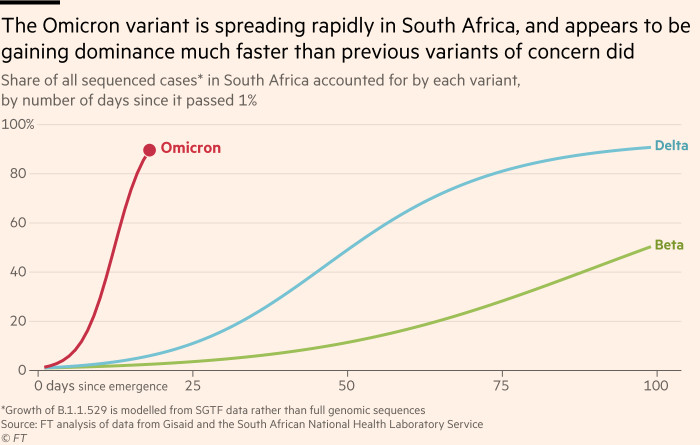 You can see in this graph the speed with which the Omicron variant has become the dominant variant in South Africa. At a much rapid pace than the Delta variant, which proves again that this is much more transmissible.

How deadly is the omicron variant?

The next question is whether the Omicron variant is more deadly or less deadly? Friends, we don’t have the clear-cut answer to this yet.  Scientists say that it would take a few weeks to determine this. But the preliminary data from South Africa show that hospitalizations have increased. But this can’t be used to come to a clear-cut conclusion because if this virus was more transmissible, it would have spread among many people rapidly. Many people would have come to the hospital at the same time. And thus the hospitalization might have increased.

On the other hand, it might be that if this turns out to be more deadly, that could be the reason for the increased hospitalization. That’s why to conclude anything about its Death Rate, wouldn’t be correct. We still don’t know whether the effectiveness of the vaccines on the Omicron variant would decrease or not. Time would answer this too.

In any case, the chances are that the vaccines would remain effective. But slightly less effective. So, if you are vaccinated, and are maintaining normal precautions, all would be good. Overall, there’s so much raw information.

Worrying about this uncertainty, governments around the world have imposed travel restrictions again. And many governments have imposed lockdowns in their country again. The United Kingdom has said that many African countries like South Africa, Namibia, Zimbabwe, Botswana, Angola, Mozambique, Malawi, Zambia, travelers from these countries have been restricted from entering the UK. The USA has said that foreigners coming from South Africa, Botswana, and these African countries, aren’t allowed in their country. But if they are US citizens, they are allowed to come. 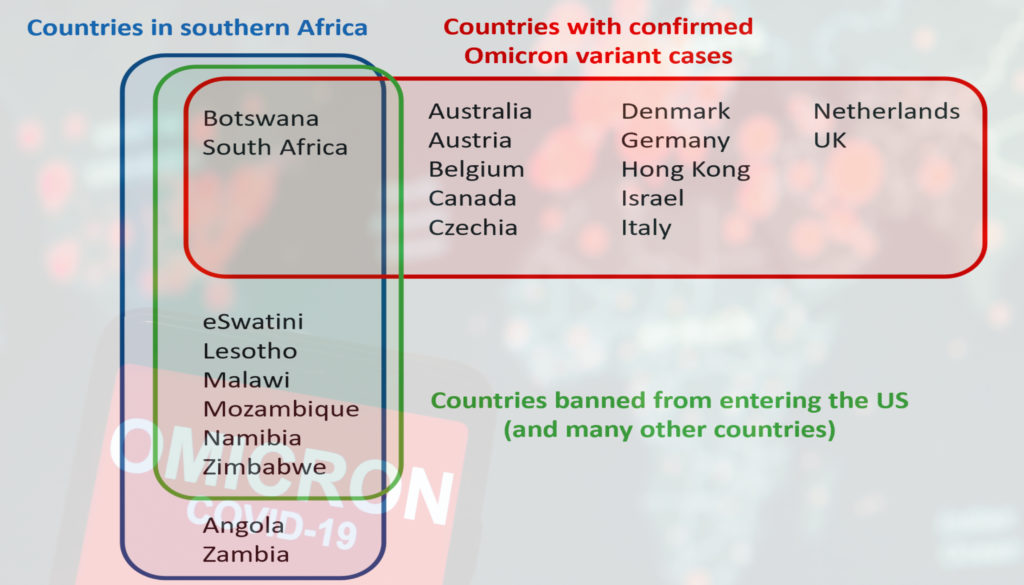 The African countries aren’t the only sources of the Omicron cases. When it has been found in other countries, why are flights from there not banned? Why have they been banned from these countries only? It is such a random decision. Many scientists have criticized the travel restrictions saying that first, the travel restrictions aren’t effective. If a person desperately wants to travel to the USA from South Africa, if he has a family member there whom he hasn’t met for years. Or there has been a death of a loved one, and he wants to attend their funeral, if he is truly desperate, from South Africa he will fly to a country from where it is allowed to fly into the USA. And he’ll go to the USA via that country.

For the past 2 years, we have seen many such cases were since there were no flights from one country to the other. People opt for other connections through another country in desperation. And then the cases spread as if there were no travel restrictions.

The second reason is that; it has a terrible impact on the lives of the average person. The common people in the world have not been able to travel freely for 2 years now. The rules are constantly changing in almost every country. It has become extremely difficult to make travel plans. Difficult for people to meet their families. But the rich have no restrictions. They can fly anywhere in their private jets. There are no restrictions on the politicians either. And the third and perhaps the most important reason, South Africa did a good thing by informing the world of this variant. 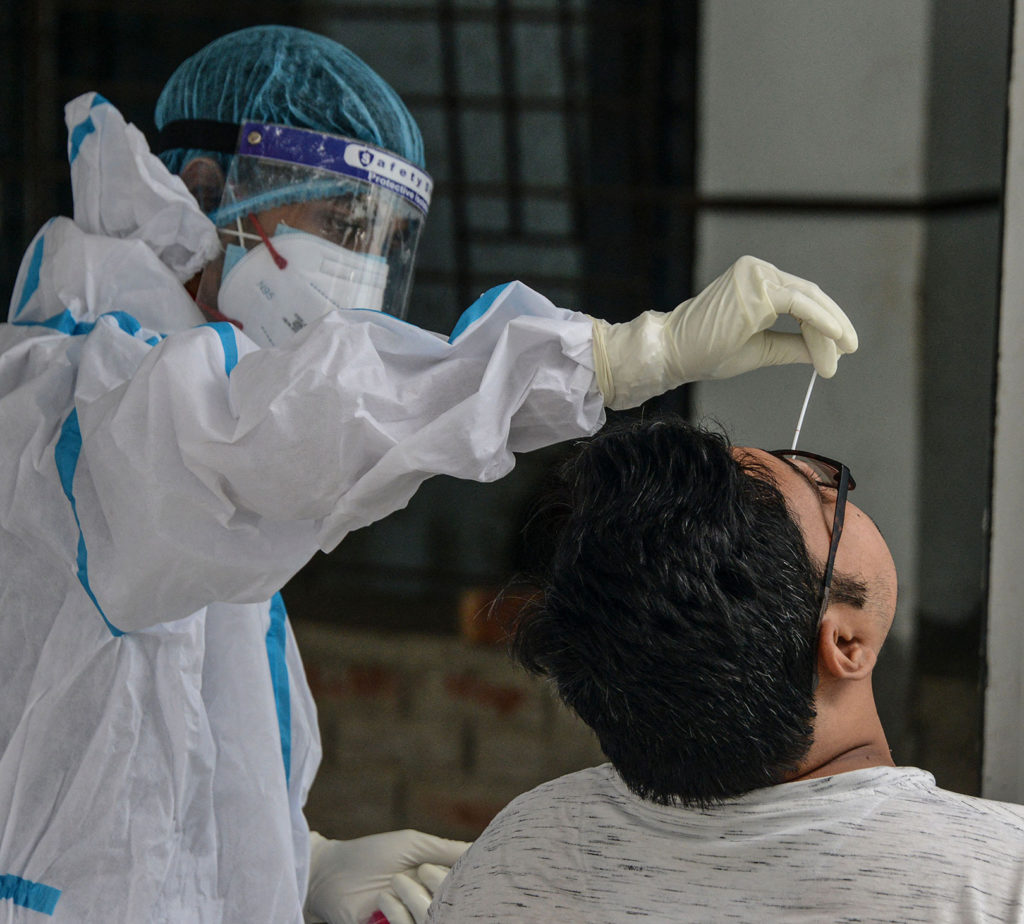 And how did the governments of the rest of the world react? By banning flights from South Africa. The entire travel industry and aviation industry of South Africa came to a standstill within mere days because of this panic.

In my opinion, to lockdown, any country, or to restrict travel from any country is a last resort measure. It should be done only after all other measures have failed. In the beginning, we were told, when the first lockdown was declared, lockdowns were in place to flatten the curve. But what’s the situation now? Governments around the world impose lockdowns and restrict flights as preventative measures. Since we don’t know how the new variant would turn out to be, as prevention, they banned flights or declared lockdowns. This is a very dangerous state. It has such an adverse effect on the lives of the average people, that is immeasurable. Think about it.

How much has your mental health has been affected in the last 2-3 years? While staying cooped up at your home. How are kids affected when they can’t go to school? How does the lockdown affect the economy of the country? And how much does this affect the treatment of the other diseases? When a country is in lockdown, everything is focused around Covid-19.

In my opinion, these decisions, and I’m criticizing almost every government in the world, are merely a political move by the governments in the world. These governments want to show that they are doing something. They want to show the citizen that they are proactive, that they’re taking action. But in reality, if they are interested, to prepare their country to deal with a new variant, they should focus on hospital beds. They should go and create new hospital beds. The hospitals need to be prepared for a new load. Instead of banning everything for the people in the country.

In the upcoming months and years, we will get news of new variants and mutations constantly. Because there would be constant mutations. But if we want to get the world back to normal, then I don’t think we can do it like this. Other options other than lockdown should be implemented by the governments for the well-being of their citizens.

One thought on “All you need to know about Omicron variant”