All you need to know about China’s artificial sun

No doubt China is a world nuclear power and it is progressing in every aspect of technology. Its Electromagnetic Pulse Weapon has become very famous. Now, its artificial sun is gaining popularity. This is the one trillion-dollar Experimental Advanced Superconducting Tokamak or EAST. Though you may know it by its nickname China’s artificial sun. In this post, we’ll explore the true purpose of this system and why it isn’t a nuclear reactor.

First of all, we can start with an overview of the east fundamentals. What is a superconducting tokamak? A tokamak is a type of nuclear fusion reactor that comes in many shapes and sizes. But a tokamak seems to be one of the favorites among the experts. The types of reactors are often broken down into magnetic confinement and inertial confinement. Inertial confinement shoots a piece of fuel with a laser heating it up enough for nuclear fusion to take place. Magnetic confinement on the other hand uses electromagnets to keep a magnetic plasma inside a chamber where it is heated enough for fusion.

Of these two, the tokamak design which is what the east artificial sun uses is a magnetic confinement device. The donut chamber shown here is a defining mark of the tokamak but the stellarator design is also popular.

A standard tokamak keeps the plasma in the donut ring shape using toroidal and colloidal magnets. 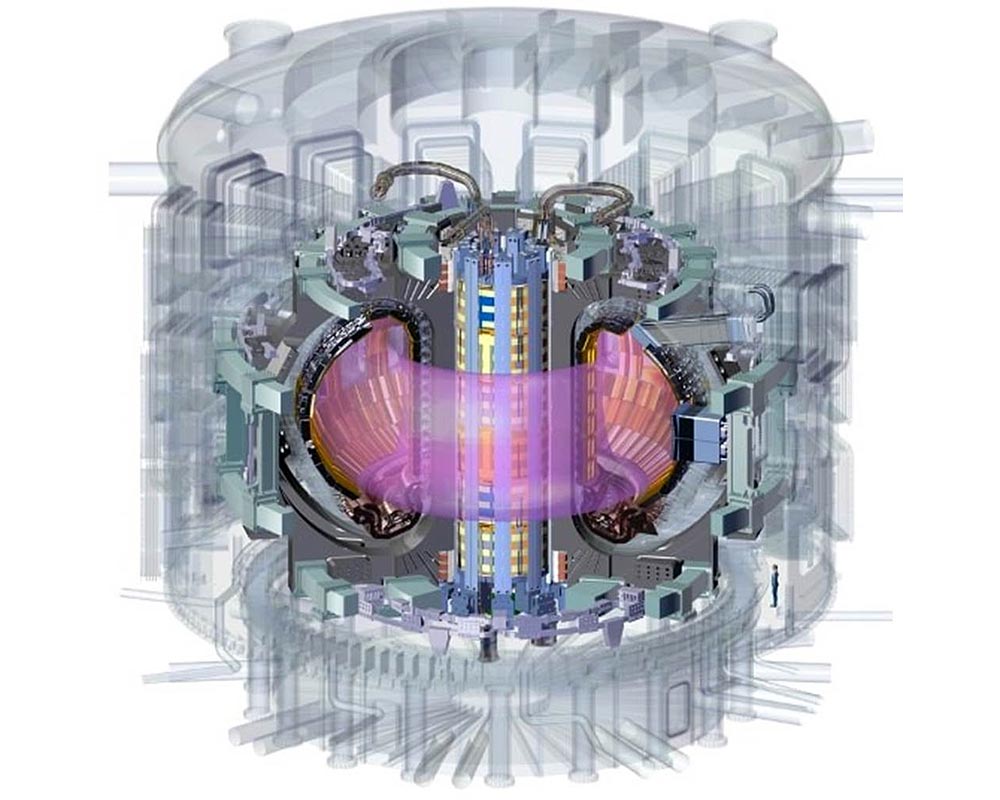 So now we know a tokamak uses magnets in a donut-shaped chamber to contain hot plasma. But why is it superconductive?

A superconductive magnet is basically a really cold electromagnet like -216 degrees Celsius cold. This means that the copper windings that make up the electromagnet have almost no resistance so very large currents can be put through them without damaging or overheating them. These high currents produce an incredibly strong magnetic field which is very useful when you need to contain a really hot plasma. 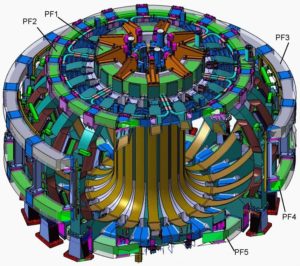 East artificial sun is not a nuclear reactor

Because the speed of light is such a huge number, this energy is very large even for a small change in mass. But in the east artificial sun, they are not trying to fuse deuterium and tritium. This is why the project isn’t a nuclear reactor. It’s a nuclear test facility. Creating energy or fusion reactions as a whole is not the point of this project. Instead, it is to understand how to create and maintain the conditions needed for fusion here on earth. Although the sun can achieve fusion reactions at a mere 15 million degrees Celsius, due to the incredibly high pressures on earth we need around 100 million degrees Celsius. This feeds into the greater purpose of this project which is to inform the International Thermonuclear Experimental Reactor or ITER.

ITER is set to be the world’s largest nuclear fusion experimental system and is drawing upon the expertise of 35 nations all around the world. Not only does it aim to produce the most energy of any nuclear reactor, but it also wants to output 10 times more energy than it consumes. For reference, the current record for this is 0.7 times the input energy. So to aid the progress of the ITER project, the east artificial sun has three main aims:

They have recently achieved all of these separately but now they must try and combine them. The most recent achievement was operating for 1056 seconds. The plasma was held at 70 million degrees Celsius which isn’t hot enough to sustain nuclear fusion in a Tokamak reactor. However, we don’t want to downplay this incredible achievement which may bring us ever closer to the holy grail of economic nuclear fusion on earth.

So the questions remain how does the east get this plasma up to such a temperature and then stop it from burning the whole place down? The heating is done in three main ways. These are ohmic heating, neutral beam injection and high-frequency waves.

The first is neutral beam injection where high-energy charged deuterium atoms are shot into the plasma where they collide with other atoms to transfer their energy as heat. Though these atoms have to first be passed through a neutralizer which removes their charge so they’re not disrupted by the magnetic fields upon entry. The second is high-frequency electromagnetic waves which work similarly to microwaves by increasing the velocity and temperature of the particles in the plasma. So that is how it’s heated but how is it contained well? 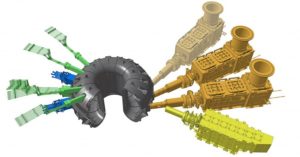 We know the east artificial sun uses superconducting magnets and these enable extremely strong magnetic fields which squeeze the plasma into the middle of the donut-shaped container. By using advanced real-time simulation, the magnetic fields can be adjusted to correct the plasma if it starts to go off course. Because the relatively tiny amount of plasma is kept far away from the walls of the donut, it doesn’t transfer much heat. This is also helped because the chamber is in a vacuum. Therefore, less heat can be transferred to the walls as only radiation is possible. Finally, the walls are lined with heat-resistant materials such as tungsten and carbon and are constantly cooled by liquid on the other side.